Washtenaw Jewish News, January, 2023
Sabbatical offers continued growth for rabbi and community – “…Alden Solovy will be joining the TBE team from January 19 to February 13 to teach a variety of classes and workshops…”

Jewish News Syndicate, Dec. 15, 2022
Everyone knows ‘Ma’oz Tzur,’ except they don’t – “And after the 2018 Tree of Life massacre in Pittsburgh, Solovy decided to add his own addition…”

Religion News Service, Dec. 23, 2020
The Best Religion Books of 2020 – “Alden has become one of Reform Judaism’s master poet-liturgists… A beautiful collection [This Precious Life] from a beautiful soul.”

The Jerusalem Post, Sept. 18, 2020
Prayers to End the Plague – “The following prayer was composed by the Pardes Institute’s liturgist-in-residence, Alden Solovy, in both Hebrew and English…”

eJewish Philanthropy, Aug. 18, 2020
A Magical Mystery Tour of Zoomland – “…I can b’dibur echad – as if living within the same word in a single breath – embrace this prayer from Alden Solovy praising Zoom…”

URJ Inside Leadership, May 26, 2020
Lamenting and Mourning the 100k Americans Who Have Died of COVID-19 – “A call to join in a day of remembrance and prayer for healing…”

Forward, Mar. 27, 2020
Modern prayers for a pandemic – “Here we have collected some of the written prayers to emerge from the last few weeks…”

Cleveland Jewish News, Aug. 7, 2019
US death tax comes to Dayton – “Alden Solovy – a prolific, celebrated writer of Jewish liturgy – wrote ‘After a Deadly Rampage‘ in 2012, based on the traditional El Moley Rachamim prayer for the soul of the departed…”

The Jewish News of Northern California, Aug. 7, 2019
America’s death tax comes to Dayton — and the words come all too easily – “…she turned to another from Solovy, which he wrote in 2016, ‘Against Gun Violence.'”

Columbus Jewish News, Aug. 6, 2019
US death tax comes to Dayton – “When Dayton’s Rabbi Karen Bodney-Halasz was asked to deliver a prayer during an Aug. 4 vigil… she already knew where to find words to fit the occasion….”

RavBlog, Nov. 21, 2018
Accessing the World of Meaningful Prayer – “I appreciate deeply the poetry and prayers of Alden Solovy…”

RavBlog, Oct. 24, 2018
This Joyous Soul: Communicating with G-d – “…[Alden] artfully crafted once again a book of prayer that touches the soul…”

Jewish Telegraphic Agency, July 25, 2018
The Western Wall ‘spit out a stone,’ and some see a message from above – “On Tisha b’Av, God revealed a deep love of Reform Jews…”

Las Cruces Sun News, Apr. 25, 2018
Temple to host writer, poet for two creative sessions – “He is a teacher, a writing coach and an award-winning essayist…”

The Jewish Independent, Mar. 30, 2018
Art and Act of Prayer – “Alden Solovy would like you to fall in love with prayer…”

The Jerusalem Post, Mar. 1, 2018
New Digital Platform Brings Together Jewish Voices from Across Spectrum – “Jerusalem resident and writer Alden Solovy described the opportunity to perform on the ELI Talks stage…”

Wisdom Daily, Jan. 4, 2018
How 6 Word Prayers Connected Me to God and Community –
“Can you pray with only six words? It began when my friend Alden Solovy invited me to join a Facebook group…”

Ejewish Philanthropy, Aug. 27, 2017
Elul: Preparing for the New Year
“My deepest connections with myself and God occur when I maintain a daily prayer-writing practice…”

Judaism and Science, July 28, 2015
Exploring Prayer: A Conversation – “Seeking to define God is not nearly as powerful as seeking to experience God…”

Jewish Journal, April 30, 2015
Wounded but Still Defending Women of the Wall – “Alden Solovy was one of the men involved in passing the Torah…” 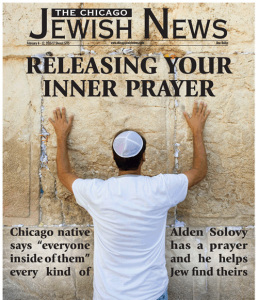 Cape Jewish Chronicle (Cape Town), Mar., 2015
My Freezing Cold Summer – “…[I] was inspired by so many fantastic teachers. Like Alden Solovy, a writer of Jewish prayers…” It includes: “Meditation for a Child’s First Torah Reading.”

Chicago Jewish News, Feb. 5, 2015
Cover Story: Releasing Your Inner Prayer – “Today he is one of the Jewish world’s best-known creators of new liturgy…”

Jewish Book Council, Sept. 22, 2014
Internal Dialogue: The Days of Awe 5775 – “Alden’s gift for bringing comfort to others through words proved its mettle.”

Religion News Service, April 8, 2014
A State of Grace Inspires Prayer Book for Life’s Sorrows and Joys – “Although the prayers were written with Jewish worshipers in mind, most have universal appeal.” 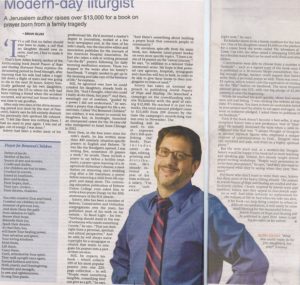 Jerusalem Post, November 14, 2013
Modern Day Liturgist – “The prayers in Jewish Prayers of Hope and Healing are soulful and meticulously crafted. Clearly inspired by Jewish texts and traditions, they appeal to non-Jewish readers, as well.”

The Forward, May 14, 2021
As conflict in Gaza rages again, a shift in the American Jewish Response – “Poets represented include Americans Alden Solovy, Walt Whitman and Cynthia Zarin as well as Israeli poet Yehuda Amichai…”

Reform Judaism.org, Oct. 27, 2020
5 Ways to Mark the Anniversary of the 2018 Tree of Life Shootings – “Prayer for the Tree of Life Synagogue,” written days after the shooting, is still applicable today…”

The Canadian Jewish News, March 12, 2020
Jewish Responses to the Coronavirus – “Solovy recently turned his attention to the coronavirus with his Prayer for Medical Scientists.”

Reform Judaism.org, Oct. 17, 2019
6 Ways to Mark the First Anniversary of the Tree of Life Shootings – “…Solovy’s “Prayer for the Tree of Life Synagogue,” written days after the shooting, is still applicable today…”

San Diego Jewish Journal, Mar. 14, 2019
The Art and Act of Prayer – “Together we’ll explore two elements of our worship…”

Jewish Sacred Aging, Sept. 8, 2018
Rosh Hoshonnah-Yom Kippur- 5779: That We May See The Good – “Stern-Kaufman then read “After a Deadly Anti-Semitic Attack,” by Alden Solovy…”

The Apopka Voice, Aug. 17, 2017
There is only one side – “We need to take to heart the incredibly poignant message of liturgist Alden Solovy…”

Reform Judaism.org, Feb. 23, 2017
His Memory is a Blessing: The Loss of My Dog, Teddy – “…liturgist Alden Solovy has written this beautiful prayer, “Passing of a Beloved Pet”…

RavBlog, Feb. 22, 2017
Nu, Did You Know? What’s New for You from CCAR Press – “…we also offer a Grateful Heart Event Program, which features our new publication from poet and liturgist Alden Solovy…”

Times of Israel, Jan. 23, 2017
Testing High Court ruling, women read Torah at the Western Wall – “Solovy said his motivation in attending the OWOW prayer meetings “is to support the right of women to pray at the Kotel…”

ReformJudaism.org, Jan. 18, 2017
How a Liturgical Poem inspired a New Jewish Song – “…music Cantor Brad Hyman wrote upon being inspired by Alden Solovy’s words.” Here’s the complete text of “Inside the Light” and the song.

The Jerusalem Post, Dec. 28, 2015
Beyond the Wall: Feminism and Jewish Pluralism in Israel – “Alden Solovy, another man praying in the minyan, was attacked and injured…”

MyJewishLearning.com, Nov. 19, 2015
Why I’m Tired of Praying for Peace – “As a rabbi, in hearing such news, the first instinct is prayer…” Includes a link to “For Paris.”

MyJewishLearning.com, Nov. 16, 2015
A Prayer for Paris – “Today, I share with you the words of modern liturgist Alden Solovy, which speak directly to our newest reality…” Includes “For Paris.”

ReformJudaism.org, Oct. 15, 2015
Sabbath of Solidarity and a Prayer for Peace – “…find a number of prayers for the State of Israel on ReformJudaism.org, including a new prayer called “We Are One” by Jerusalem-based liturgist Alden Solovy.”

Religious Action Center of Reform Judaism, Oct. 15, 2015
The Ongoing Escalation in Israel: Resources for Making Sense of it All – Alden’s essay “Choppers over Jerusalem” listed among the “Reform Movement Responses.”

Brattleboro Reformer, Sept. 18, 2015
Religious Services – The liturgy includes the prayer “Place Your Name Upon Us” by Alden Solovy.

Jerusalem Post, June 12, 2015
Meet the Men of the Women of the Wall – “Solovy, who was attacked along with Kalech in April, is one of those who believes he has gained personally from his involvement with WoW…”

The Jewish Chronicle (Pittsburgh), Mar. 26, 2015
Spiritual cleansing can accompany the physical one – “In his poem “Egypt Inside,” poet Alden Solovy challenges us to rid ourselves of the negative emotions…”

The Jewish Post and Opinion (Pittsburgh), Mar. 25, 2015
Editorial (including a review of Haggadah Companion: Meditations and Readings) – “…anyone could benefit from these readings at any time…” Includes the text of “Egypt Inside.”

Catholic Herald, March 20, 2015
How should we face our last years? This booklet will guide you towards an answer – “These are a mixed group from different faith traditions, including Alden Solovy, a Jewish poet…”

JUF Express, January 16, 2015
From JUFNews.org and around the web – “Chicago native Alden Solovy, a poet and liturgist…”

Newsday, November 1, 2014
Asking the Clergy – “Alden Solovy’s Jewish Prayers of Hope and Healing is filled with prayers that touch on life’s joys and sorrows.”

JUF News, August 28, 2014
People first, God second on Yom Kippur – “This year, I will remember the words from a new book by my friend Alden Solovy, Jewish Prayers of Hope and Healing…”

Rav Blog, August 26, 2014
A Long, Painful Summer: More Meditations On Israel – “Here is a poem written by the liturgist Alden Solovy, inspired by a workshop he held with us during the CCAR trip…”

JTA News, June 17, 2014
Jewish movements send prayers for safe return of kidnapped teens – “A prayer for the teens’ safe return written by Alden Solovy was posted on the blog of the Reform Judaism website.”

Wicked Local Lexington, May 29, 2014
A salute to the fallen: Lexingtonians remember those who died for our country – “…Jessie Steigerwald, a member of the School Committee, then read Alden Solovy’s poem “To the Soldier, to the Veteran.” After the ceremony…”