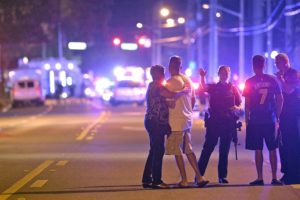 In Orlando early Sunday, 50 people died in the deadliest mass shooting in U.S history, domestic hate and terror focused on a popular gay nightclub. This is a prayer of shock, mourning and consolation, incorporating quotes from a man who escaped the club, “there was blood, blood everywhere” and “it was chaos.” It’s based on a prayer called “After a Deadly Rampage.” See “At the Hand of Violence” for a prayer in memory of an individual. May the memories of the righteous be a blessing. Here’s a prayer called “Pride Wins: A Prayer after Homophobic Brutality.”

Author of life,
Source and Creator,
Grant a perfect rest under Your tabernacle of peace
To the victims of the massacre
In Orlando, Florida,
Forty-nine people whose lives were cut off by violence,
In a rampage of aggression beyond understanding,
Targeted by vehemence and hate.
May their souls be bound up in the bond of life,
A living blessing in our midst.
May they rest in peace.

There was blood everywhere.
Fifty-three wounded. And chaos.

G-d of justice and mercy,
Send healing to those wounded in this assault.
Fifty-three people who were
Struck by brutality.
Remember all the survivors of this attack,
Witnesses of shock, horror and dismay.
Ease their suffering and release their trauma
So that they recover lives of joy and wonder.
Grant them Your shelter and solace,
Blessing and renewal.
Grant them endurance to survive,
Strength to rebuild,
Faith to mourn,
And courage to heal.

G-d of love and shelter,
Remember the families and friends
Of all the dead and the wounded
In Orlando and throughout the U.S.
Remember them with comfort and consolation.
Grant them Your protection,
Your wholeness and healing.

Heavenly Guide,
Put an end to anger, hatred and fear
And lead us to a time when
No one will suffer at the hand of another,
Speedily, in our day.

Postscript: This prayer also refers to other deadly U.S. mass shootings. Sadly, I’ve written many prayers after mass shootings. This is the first time I’ve incorporated a plea to end gun violence into a post-massacre prayer. In previous prayers after these tragedies I avoided reference to the gun control debate in the U.S. in order to provide a memorial prayer that we all can use — regardless of point of view — at these times of horror. For a more generic prayer, see “After a Deadly Rampage.”

Here, again, is a prayer called “Pride Wins: A Prayer after Homophobic Brutality,” and another called “Love Wins: A Pride Prayer, Jewish.”

See also: “For the Children of Newtown” and “After the Washington Navy Yard Shootings.” This prayer is based on a “For the People of Norway.” Here’s a Yizkor prayer to be said for an individual killed “At the Hand of Violence.” Please also see this “Munich Massacre Memorial Prayer.”