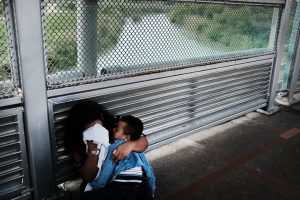 This prayer is in response to the detention of children at the U.S. border, as well as the tragic deaths of innocents there and in the custody of the federal government. The first stanza alludes to the Emma Lazarus sonnet, New Colossus, which appears on a plaque inside the pedestal of the Statue of Liberty. Lazarus calls the border “our sunset gates” and the statue “the Mother of Exiles.” The closing line is from the siddur, the Jewish prayer book, from the section called birkot hashachar, the morning blessings. The format of the prayer follows other social justice prayers, such as “Against Gun Violence” and “Against Hunger.”

Against Detaining Children
G-d of the captive,
G-d of the imprisoned and detained,
The voice of heartbreak echoes across the land,
Children rejected at our sunset gates,
The Mother of Exiles weeps for the innocent,
Their journey to Liberty bringing detention, deprivation and death.
Has compassion fled our borders?
Has the lamp at our door been extinguished?
Has Justice abandoned her post?

Source of comfort and hope,
You call upon us to stand in the name of the children,
To witness against mistreatment and neglect,
To fight a government that separates parents from minors
At the border of our nation,
Flaunting power,
Ignoring decency and law,
Allowing the innocent to die.

Bless those who dedicate their lives to human rescue.
Grant them the fortitude to battle in the name
Of the unknown, the unseen,
Those who cannot be forgotten.
May the work of their hands never falter,
Nor despair deter them from their holy calling.

Bless those in human bondage with hope and courage.
Grant them the strength and the fortitude
To face the indignities and privation forced upon them.
Hasten their release.
Grant them lives of health and prosperity,
Joy and peace.

New here? Subscribe here to get my newest prayers by email.
Share the prayer! Email this to a friend.

Postscript: The final two stanzas of this prayer, prior to the closing line, are adapted from “Against Human Trafficking.” See also: Against Poverty“and “Against Tyranny,” as well as various Psalms of Protest.

Please check out my ELItalk video, “Falling in Love with Prayer,” and This Grateful Heart: Psalms and Prayers for a New Day. For reprint permissions and usage guidelines and reprint permissions, see “Share the Prayer!” To receive my latest prayers via email, please subscribe (on the home page). You can also connect on Facebook and Twitter.