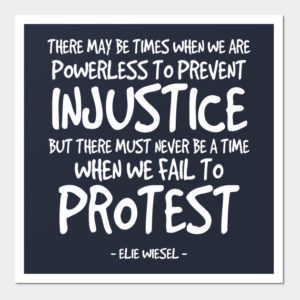 The first three of a new series, “Psalms of Protest.” In both of my countries, Israel and the United States, self-interested governments attack democracy and decency. These Psalms of Protest combine the unique form and language of the Psalmist with the prophetic voice crying out for justice. Psalms often build upon one another, expanding or focusing a theme, which is true for this series, as well. As a result, I plan to post these works in groups.

Children, Detained: Psalm of Protest 1
A psalm of protest,
When children are stripped from their parents’ arms,
When refugees are jailed as criminals.
How long, G-d of justice?
How long will arrogance strike with impunity,
Attacking the heart of innocence?
They are like ten-thousand bees stinging the eyes,
Relentless with violence.
They are like ten-thousand nettles piercing the skin,
Relentless with hatred and without remorse.
Let the arrogant be brought low.
Let the wicked repent.
Let righteousness heal these wounds
And set the captives free.

Free the Captive: Psalm of Protest 2
A psalm of protest,
When tyranny mocks justice,
And the halls of power are painted with bitterness.
Let the righteous rail against cruelty and deceit
So that their voices echo across the land,
So that their footsteps shake the foundations of contempt,
So that their deeds unseat wickedness from the chambers of power.
The land will tremble, the seas will shake,
The heavens will thunder, while the winds split the sky,
Demanding release of the captive
And due process for the enslaved.
Demanding honesty and truth
From governments and leaders,
So that G-d’s word will shine
Even in the hardest hearts of our leaders.

When a New Pharaoh Arises: Psalm of Protest 3
A psalm of memory,
When a new Pharaoh arises.
Do you remember how Pharaoh despised the children?
How he commanded that they be ripped from their mother’s arms and destroyed?
How he used babes to subjugate a people and undo a nation?
Remember, too, how a few brave midwives subverted Pharaoh’s plans.
Remember, too, how arduous is the work of freedom.
For Pharaoh has a heart of stone,
And he hardens the hearts of all who serve him
With treachery and deceit,
With fear and disdain.
But you have a heart of flesh,
And the spirit of G-d’s justice,
To be like Moses and Miriam,
Like Aaron and Joshua,
Like Shifra and Puah,
To unseat the reign of tyranny.

New here? Subscribe here to get my newest prayers by email.
Share the prayer! Email this to a friend.

Postscript: These Psalms are a break from my general approach of staying apolitical in writing prayers. Less than 20 of my 700 pieces of liturgy reflect explicit political views, and most of those have been written since the previous U.S. presidential election. I suspect, that I’ll lose some readers as a result of posting these pieces. It is a writer’s job to speak out.

Please check out my ELItalk video, “Falling in Love with Prayer,” and This Grateful Heart: Psalms and Prayers for a New Day. For reprint permissions and usage guidelines and reprint permissions, see “Share the Prayer!” To receive my latest prayers via email, please subscribe (on the home page). You can also connect on Facebook and Twitter.