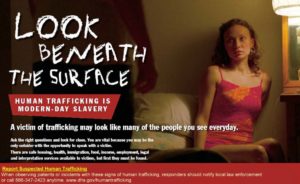 Human trafficking is a crime against humanity that still flourishes. This prayer uses the broadest definition of human trafficking: illegal trade of humans for sexual exploitation, forced labor or modern-day slavery. The sex trade is the key driver of trafficking. This prayer is appropriate for the Passover Seder and appears in my book, Haggadah Companion: Meditations and Readings. To listen, click on the triangle in the bar below. The text follows.

Addendum, October 14, 2015: The FBI announced that 149 underage trafficking victims were recovered and 153 pimps were arrested in a nationwide human trafficking operation conducted throughout the United States last week. Here’s a link to the FBI press release. Here are eight facts about the sex trade.

Against Human Trafficking
G-d of the prisoner,
G-d of the slave and the captive,
The voice of suffering echoes across the land.
Lonely weeping in a night that never ends.
Our brothers
Are sold like coal
To be burned and discarded,
Traded like empty boxcars,
To haul unbearable loads of
Cruelty and degradation.
Our sisters
Are kidnapped and conned,
Used like empty vessels,
Their bodies abused and violated,
Their hearts and souls assaulted.

Source of comfort,
Rock of love and truth,
You call upon us to stand
In the name of justice and freedom:
To witness against human life
Treated as chattel,
To fight those who
Trade human beings as property,
To muster our power and energy
Against this force of evil.

Bless those who dedicate their lives to human rescue.
Grant them the fortitude to battle in the name
Of the unknown, the unseen,
Those who have been forgotten.
May the work of their hands never falter
Nor despair deter them from their holy calling.

Bless those in human bondage with hope and courage.
Grant them the strength and fortitude
To face the shames and tyrannies forced upon them.
Hasten their release.
Grant them lives of health and prosperity,
Joy and peace.

Blessed are You, G-d of All Being,
Who summons us to liberate the oppressed.

Postscript: Other prayers in this series include “Against Poverty” and “Against Tyranny.” In January, 2011, this prayer was used by the ATZUM Task Force on Human Trafficking http://www.tfht.org/. TFHT was headed to Israel to lobby for criminalizing the act of buying sex. The demand for paid sex fuels the crime of human trafficking. As part of the mission send off, Rabbi Gary Bretton-Granatoor of Congregation Da’at Elohim in New York City read it at Friday night services. Peggy Sakow and other members of the Temple Emanu-El Beth Sholom, Montreal, Committee Against Human Trafficking and Interfaith Coalition were profoundly generous in their guidance and support of crafting this prayer. Three other social justice prayers appear in Haggadah Companion: Meditations and Readings, including “Against Poverty.”

Photo Source: Children and the Law Blog of the Southwest Juvenile Defender Center