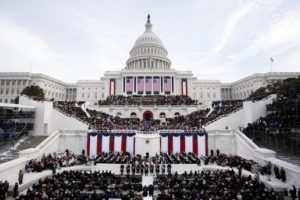 In “On Politics and Prayer,” I wrote that the Torah teaches us that even when we oppose a specific politician, we must pray for the wisdom of our leaders and the quality of government. Still, I’ve struggled “In Search of a Prayer for the New President.” This is a three-prayer liturgy. It reflects my view that extraordinary times require extraordinary prayers. “For the U.S. President” is written in classic Siddur style. “We Will Be Heard” is a prayer of outrage and conscience. “May G-d Bless and Keep the President” is a prayer of deep concern, with an edge of humor. Further comments on the evolution of these prayers follow in the postscript.

For the U.S. President
G-d of history,
Bless the U.S. President with skill,
To act with inspiration and insight,
Becoming a visionary,
Building our nation and communities
In Your image,
A steward dedicated to justice,
So that our cities and towns
Resonate with compassion and health,
Justice and mercy,
Kindness and peace.

Bless our President
With dedication and foresight,
Fortitude and imagination
To solve the complex issues that threaten our future.
Let the weight of the office
Change him for the good.
Let the institutions of our government
Keep his worst instincts in check.
May he lead us to a time when neighbors embrace
And communities thrive,
A time when liberty and equality
Reign supreme.

Source and Shelter,
Grant safety and security
To all nations and communities,
So that truth and harmony will resound
From the four corners of the earth.
Let the light of wisdom
Shine brightly in the halls of power,
A beacon of hope
For every land and every people.

We Will Be Heard
Today
I am an immigrant,
A drag queen,
A rape survivor.
An African Methodist Church set on fire,
A mosque pelted with rocks,
A synagogue painted with hate.
I am disabled.
A woman paid half of a salary.
A Black man encircled by police.
I am Asian, Latino, Hispanic,
Native American and Multi-Racial.

Yes,
We pray for wisdom and grace
To land like a miracle
On the President,
Transforming his rhetoric of hostility and violence
Into deeds of compassion and love.
And still we stand in shock and fear
That our rights will be trampled in public
And repealed in law.

Don’t say suck it up.
Don’t say get over it.
We haven’t forgotten the lynching,
The darkness of the closet,
The death by back-alley abortion.

May G-d Bless and Keep the President
May G-d bless and keep the President from …
… turning his back on refugees.
… abandoning minorities, the poor and the disabled.
… alienating our allies and empowering despots.
… destroying LGBTQ rights.
… telling women how to control their lives and their bodies.
… destroying our country.
… irreparably damaging the Supreme Court.
… abandoning the tired, the poor, the huddled masses yearning to breathe free.
… forgetting the truths that are self-evident.
… speaking then denying then speaking then denying.
… establishing a national religion, abandoning the separation of church and state.
… inciting even more racism, anti-Semitism and misogyny.
… mocking the disabled, attacking Gold Star families and denigrating women.
… disemboweling the Fourth Estate.
… unleashing sinat chinam.
… undoing this grand experiment in recognizing inalienable rights.
… being re-elected.

May G-d bless and keep the President …
… occupied with trivial matters to limit his impact.
… aware of all the communities he was elected to serve.

May G-d bless and keep the President away from…
… Obamacare.
… Twitter.
… the nuclear launch codes.
… Medicare and Social Security.
… the White House.
… acting on his misogynistic impulses.

May G-d bless and save the President from himself,
And save us from him.

Postscript: Here are additional prayers that might be included in an Inauguration Day Service: “The Preacher Said,” “Let Truth,” “Against Tyranny” and “To the Streets.” “For the U.S. President” is based on my prayer for Parashat Korach 5775 called “For Political Leadership.” It’s written with a timeless and non-partisan intent, with the notion that it can be used for future presidents. “We Will Be Heard” was originally written as a post-election, pre-inauguration response to this election. It first appeared on RitualWell.org and Facebook. I’ve modified it slightly for Inauguration Day and beyond. “May G-d Bless and Keep the President” is based on a Facebook thread about praying for the new President, a process described in my RitualWell.org essay, “In Search of a Prayer for the New President.”