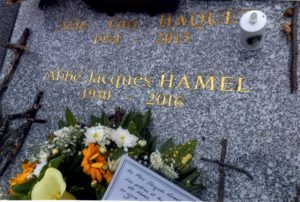 We’re surrounded by violence. Orlando. Nice. Tel Aviv. Pittsburgh. Innocents dead at the hand of terror. In Saint-Étienne-du-Rouvray, France, an 84-year-old priest was murdered in his church, Fr. Jacques Hamel. It made instant world news and faded just as fast. There are so many other terror attacks. Larger attacks. More than one dead.

ADDENDUM, April 28, 2019: In memory of Lori Gilbert-Kaye, z”l, who was murdered at the Chabad center outside San Diego during services, I’ve added a new line: “A woman in prayer.” Also, in the opening stanza, I’ve added references to that attack and the Tree of Life massacre.

One soul.
Just one soul and the world moves on.
We are shocked by the scale of terror.
The 49 and the 84 and the 325
With a plus sign next to it because, well,
It’s just tough to get an accurate count
In so much death.

One is everything.
Each one a human.
Each one a life.
One is enough to cry out to heaven.

When we count the scope of terror,
The range of death,
Remember, too,
The injured and the wounded,
The witness and the bystander,
The first responder and the families.

One is 100 witnesses.
One is 1,000 mourners.
One is 10,000 traumas.
One is a soul G-d sent to this earth.
One is everything.
A priest doing holy work.
A boy studying Torah.
A girl sleeping in her bed.
A woman in prayer.
One soul. One heartbeat.
One more, too soon.

G-d of Consolation,
Every soul is Yours,
A world, unique and holy.
Let Your peace reign quickly among us.
Let violence, hatred and terror vanish.
Let Your comfort descend from heaven,
And let the righteous rest in peace.

This is a modified version of an essay that first appeared on RitualWell. See also a prayer “To the Terrorist,” which is part of my “Liturgy after Terror Attacks,” originally written for my “Liturgy for 9-11.”