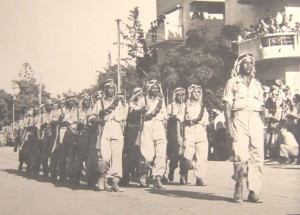 For the second time in two weeks, a Druze soldier was attacked while off duty for speaking Arabic. The Druze have had a distinguished military service on behalf of Israel. Fortunately, my friends who’ve lived in Israel longer than me say that there isn’t widespread racism against the Druze. Still, these incidents are profoundly disturbing, not just because the victims are defenders of Israel, but because of the underlying bigotry that led to the attack, which is no different from the root cause of this summer’s violence against Muhammad Abu Khdeir. May hatred be abolished and peace established within our borders.

For Druze Soldiers in the IDF
Ancient One,
Shield of Israel,
Grant safety to the soldiers of the IDF,
Wherever they serve,
In times of calm
And in times of turmoil.

Holy One,
Take note of the
Brave Arab soldiers in the IDF,
Druzim who have cast their fate
With this nation and this people,
Men and women who serve
With loyalty and distinction.
They face an additional threat:
Hatred and hostility from within.
Let no Jew raise a hand against them.
Let no Israeli perpetrate violence upon them,
For we have been strangers in many lands,
For we have known injustice
At the hands of others.

We stand with the defenders of Israel.
We honor the guardians of Zion.
We hold dear the sentries of Am Kadosh.

Postscript: Thank you to my friend Rabbi Bob Carroll for his comments on earlier drafts of this prayer. Here are more prayers for the IDF, including: “For Soldiers of the IDF,” “When My Child Enlists in the IDF” and “Lone Soldier in the IDF.”