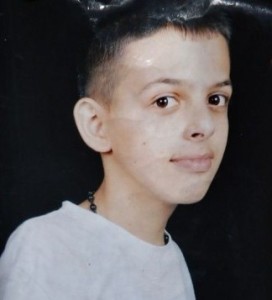 This is prayer in memory of Muhammad Abu Khdeir, the 16-year-old Arab boy burned to death at the hands of Jewish extremists. It’s part lament — that some of our own Jewish people could commit such a heinous act — and part a prayer to honor his memory. As such, it is explicitly written to be said by Jews. To emphasize the theme that the murder of any child is intolerable, it borrows from my prayer “They Were Boys: A Yizkor Prayer,” written in memory of Gil-ad z”l, Iyal z”l and Naftali z”l. The last line is from Ṣalāt al-Janāzah — the Islamic funeral prayer, as it appears on Wikipedia — and is shown in italics. I hope that I’ve used it in a way that is respectful of the Moslem tradition.

Another Boy Lost
Oh my nation,
In this grievous hour of pain and loss,
Another boy is dead,
This time by our own hand.
Oh my people,
That some of our own could
Commit such an atrocity!
An atrocity by fire.
He was a boy.
Stolen from his family,
Stolen from his people,
Stolen from life itself.
A boy.

G-d of All,
Grant a perfect rest under Your tabernacle of peace
To Muhammad Abu Khdeir
Whose life was cut off by violence
In an act of witless anger and hatred.
A boy.

Blood is blood.
Breath is breath.
Life is life.
May his memory become a source of
Courage to our nation and our people
To reject racism and hate.

G-d whose name is Peace,
In this hour of grief,
Remember Muhammad.
A boy.
Bless his family with consolation and strength.
Grant them endurance, hope and courage.
Let him find peace in the cradle of heaven.

Oh G-d,
Admit him to Paradise
And protect him from the torment of the grave.
Make his grave spacious and fill it with light.

Postscript: In writing this, I selected one line from the Ṣalāt al-Janāzah and removed some language. The line reads in full:

“Oh G-d, admit him to Paradise and protect him from the torment of the grave and the torment of Hell-fire; make his grave spacious and fill it with light.”

I removed the reference to Hell-fire for two reasons: first, because of my discomfort with the language. Second, to avoid a potential misinterpretation by those outside Islam. The original name for this prayer was “Blood is Blood,” also to emphasize that all life is sacred, but after thinking about the prayer, it seemed too harsh of a name for a memorial prayer. Thanks to Rabbi Bob Carroll of Interfaith Encounter here in Israel and Rabbi Ruth Abusch-Magder of Be’chol Lashon in the U.S. for your review and comments. Here’s a link to “They Were Boys: A Yizkor Prayer,” and other prayers for Israel. Please check out my new book, Jewish Prayers of Hope and Healing.